After a number of recent health-related setbacks, both Stefania and Ohannes realised that they needed some help at home.They found the process for organising home care particularly complicated, especially as English was their second language. This confusion led to them having to wait an extra 18 months for their home care packages.

Stefania and Ohannes came to Australia separately in search of a better life. After a chance meeting, they discovered that life was better together.

Stefania moved to Australia from Poland with her first husband at age 45, they were refugees seeking protection and a better way of life. “We came with nothing, just our suitcases. I did not speak much English, we had no money and I wasn’t young, so finding work was hard. I finally found a job working in an electrical parts factory, where I stayed working and saving for 14 long years. Sadly my husband got sick with cancer and passed away.”

Two and a half years later a friend of Stefania’s persuaded her to get out and meet new people, so apprehensively, she joined her friend at a Latino Dance. The Club Marconi where the dance was held, is an international club, and was predominately frequented by people from European backgrounds.

“I see from a distance that all the men were very nicely dressed, I look again and see one man in particular and I think to myself that he looks like an old playboy.” Stefania giggles. “He gestures to me to come over to him and I say, ‘No way, you want it, you come here’, and he come over and asked me to dance. I refused, but he persisted and eventually won me over. That was in 1997and we got married seven years later in 2003.”

In 2009 Ohannes went into Liverpool Hospital for a heart operation – CatholicCare was the organisation assigned by the hospital to provide six weeks of aftercare in-home support, covered by the government, to help the patients recovery after surgery.

“CatholicCare were great, but after only six short weeks the services finished, and I had to rely on Stefania to help with my recovery.” Ohannes recalled

To help with the recovery, Ohannes was advised to go out every day to get some exercise.

“One day I went out for a walk and I received a call from Stefania, ‘John I’ve collapsed’, she had slipped on the floor and couldn’t get up.” Ohannes shares

After the operation on her broken hip, Stefania was in the hospital for three months for rehabilitation. During this time Ohannes knew that they needed to get out of their townhouse which was no longer suitable for either of them, as they could no longer get up and down the steep steps.

“After a couple of weeks of looking at places that weren’t suitable, I got a call from a place that we loved in Casula, and we put our deposit on it straight away. The week that we were due to move I had a heart attack, thankfully my brother and his son were able to help move everything in for us whilst I was in hospital. It was then that I realised that we were going to need some help at home.

“I asked around others in the village and I was told to call My Aged Care. I contacted them but was given the runaround. Every time we talked to them it was like we had to start from the beginning again. Finally, I remembered how helpful CatholicCare had been, so I called them to see if they could help us again. 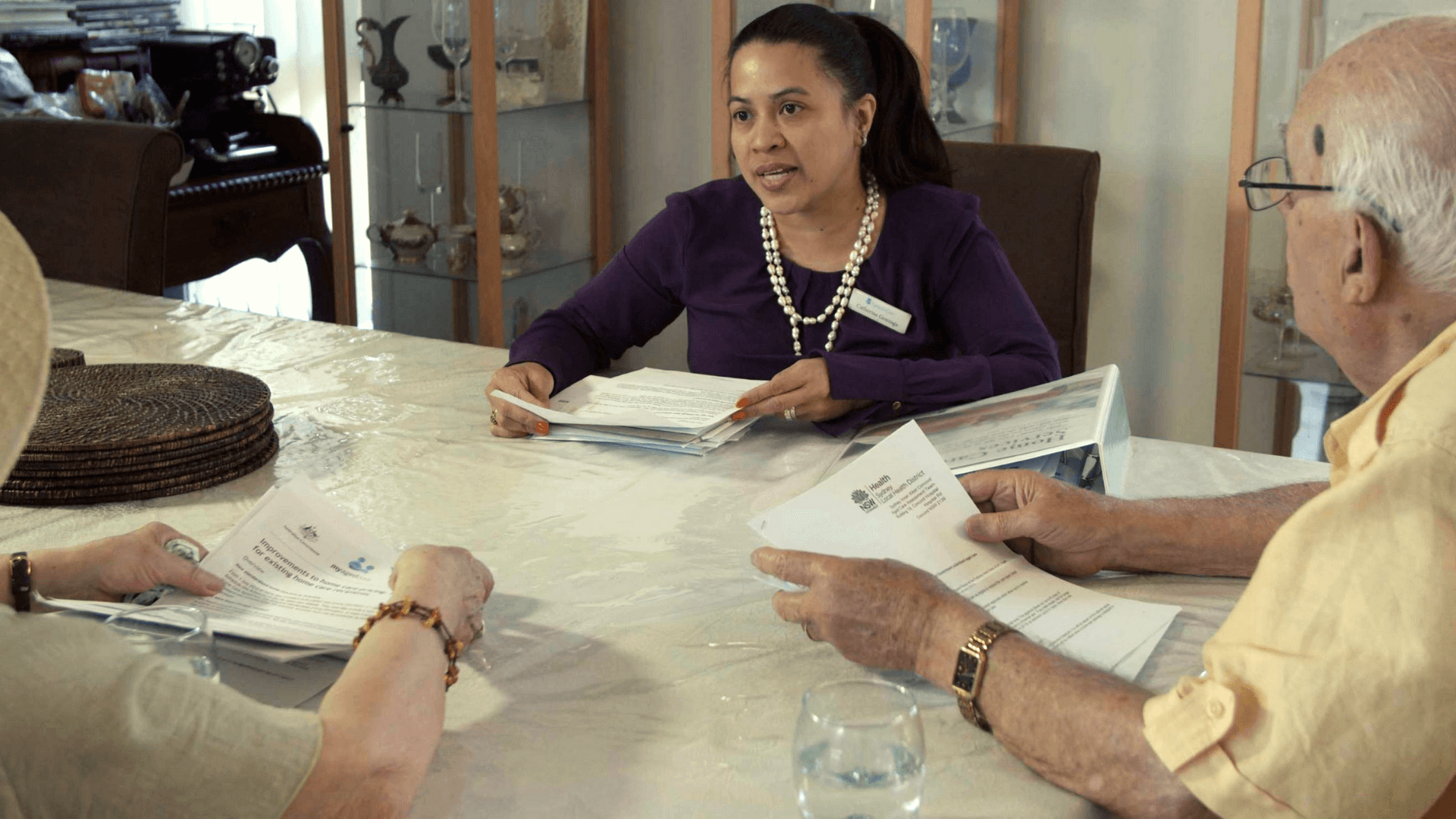 "Catherine who is the Home Care Specialist came to our house and sorted everything out. Without her, I still don’t think we would have any services provided.” Ohannes said

Catherine recalls the day she met with Stefania and Ohannes, “Stefania had just had another fall, this time hurting her shoulder, and they were in desperate need of some in home support. I asked them about how far they had gotten through the My Aged Care process and they showed me a letter, but they weren’t sure what it meant.”

"Ohannes produced the letter that they had received from My Aged Care, 'We received this letter, we read it, but because English isn’t our first language, we didn’t understand the meaning of the letter. It wasn’t clear what they were asking for, so we put it aside and eventually forgot about it.' When I looked at this letter, I realised that it was their approval letter for a Home Care package, but it had lapsed”.

What Stefania and Ohannes didn’t realise was that they only had 56 days to contact My Aged Care, provide them with the activation code that was printed in their letter and they would have had their home care services start straight away. Catherine was devastated to find that the contact period had lapsed and Stefania and Ohannes would now have to go to the back of the queue and wait up to 18 months, with thousands of others, to receive their home care services.

“Sadly, this happens more often than you think. CatholicCare has been trying to help a lot of seniors get registered with My Aged Care, because it’s a very complicated system and it has made a lot of seniors all over the country anxious. Especially when they need help straight away and they are waiting for services for up to 18 months."

“My recommendation to all seniors is not to wait. As soon as you need assistance at home give CatholicCare a call on 13 18 19and we can help you understand the My Aged Care application process and help you apply for a Home Care package,” Catherine comments.

Thankfully for Stefania and Ohannes, CatholicCare was able to provide them with some volunteer and private care services while they were on the waiting list for their Home Care package. When asked if they would recommend CatholicCare after this experience, Stefania answered confidently.

“CatholicCare is a great organisation, they really understand and want to make sure that your services are good. Thank you to CatholicCare for looking after us.”

CatholicCare’s Home Care Specialists really care and have a good understanding of the My Aged Care System. Call our friendly team today on 13 18 19. We're here to support you through every step of the process.

Stay up to date with what we’re doing