At 85, Barry has led an extraordinary life of remarkable achievements. Even though he is now facing a number of health setbacks, which slow him down physically, he is sharp as a tack and remembers everything like it happened yesterday.

Barry, who grew up in Camperdown in Sydney, gives a cheeky grin when he recounts stories of his early years. A talented sportsman in his youth, Barry enjoyed watching and playing numerous sports, particularly tennis. Pointing to the trophy on his shelf Barry recalls the time that he and a mate won the men’s tennis competition, “we were only boys and yet we played in the men’s comp. In those days you worked hard to get a trophy, nowadays you get one for turning up”.

Barry recalled that he also won a lot of medals and ribbons in ballroom dancing. When asked how he got into the ballroom dancing scene he added it was when his mate and tennis partner said “we’re not going to meet any girls this way, we’ve got to learn to dance.” So with that they strolled on down to Bill Lascott’s dance studio on George Street and started working on their dance moves there.

Barry’s mate soon met a young lady and lost interest, but Barry was just finding his feet. After winning a few minor competitions Barry was directed to the Froulop and Paton Dance Studio in Darlinghurst to further his ballroom dancing career. There he was matched with a talented dance partner.  Barry’s eyes light up and he becomes animated when he remembers all the competitions they entered. “We had to do four dances, we had to start with a Waltz, Foxtrot, Tango and then the Quickstep. You watch on Dancing With the Stars now, they come off after one dance and they can’t breathe. We had to do four dances in a row.”

Whilst still very young, Barry and his partner were chosen to represent New South Wales in the Maiden Dancing Challenge competing against a couple from Victoria. He couldn’t believe it when they walked away winners of such a prominent event, “I won a lot of stuff, I got a lot of sashes and things but the only thing I saved was this big trophy. We won this for the Maiden Dancing Challenge in 1954.”

Not only was Barry dancing up a storm through his teenage years, he took up an apprenticeship as an electric fitter at the Standard Telephones and Cables Company in Alexandria after leaving school at 15, “in those days you did five years apprenticeship, then came out and did another six months on the job.” With the end of his apprenticeship in sight and with his dancing career in full swing, Barry was called up to train in the National Service.

“I went in to the service and trained in Wagga Wagga for six months and that interfered with my dancing, my trade, everything. But it was worthwhile. It was an experience.”

After completing his training in the National Service Barry returned to Sydney to continue his apprenticeship. Unfortunately due to his lengthy absence Barry’s dance partner had lost interest in dancing and so he decided not to pursue dancing competitively any longer. Although he continued to show off his talents when he went out to parties and clubs.

Today, Barry, who’s one of CatholicCare’s Home Care clients suffers from Spinal stenosis which severely affects movement in his back and legs and he has recently been diagnosed with Parkinson’s disease which attacks the nervous system, also affecting his body movement.

Now restricted to walking with a walking stick or frame to support him, Barry is saddened that his dancing days are now behind him, but now enjoys sharing his fond memories and new activities with his Care Worker Nina.

“Nina has become a good friend of mine, she did from the word ‘go’ I couldn’t be without her. She’s my right arm. She just keeps me going.” 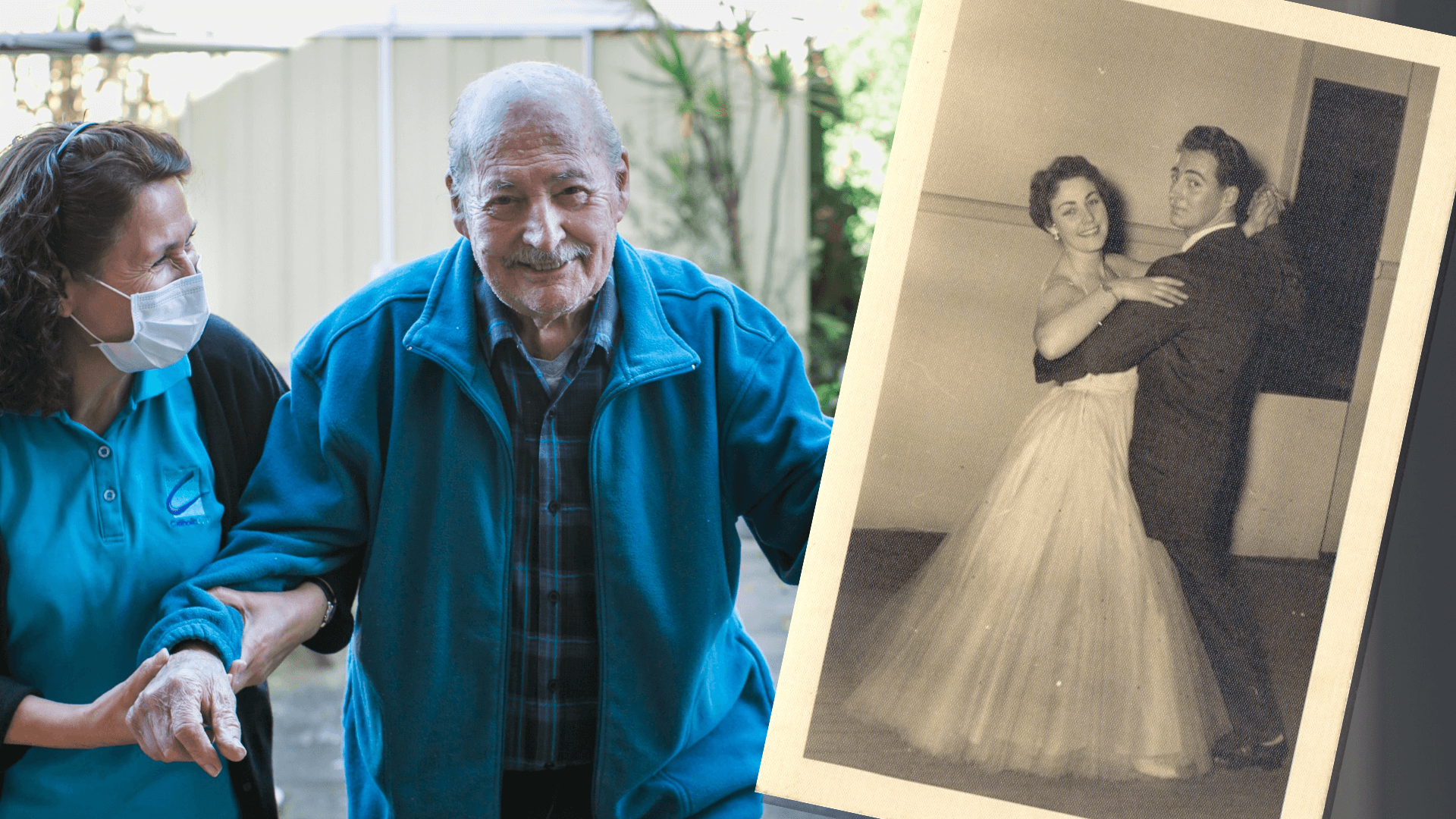 Stay up to date with what we’re doing